Benavides delivered another mature ride, completing day three in a solid 12th place. Despite riding much of the stage alone, the young Argentinian was able to accurately navigate through the challenging special, ultimately losing the minimum of time to the chasing riders behind. After his three consistent rides so far, Luciano lies in an excellent seventh in the provisional overall standings, just eight minutes from the lead.

Following on from his third-place finish on Monday’s stage two, Pablo Quintanilla was one of the first riders to enter today’s 403km timed special. Soon catching and passing the two riders ahead of him, the Chilean star found himself with the difficult task of opening the stage through the dunes that featured predominantly in the first half of the special. Taking care to minimise any mistakes, the former FIM Cross-Country Rallies World Champion initially took a steady approach before increasing his pace during the second half of the day. Reaching the finish as 23rd fastest, Pablo now sits in a strong 12th overall, just over 10 minutes down on the event leader.

Stage four of the 2021 Dakar Rally will challenge riders with a 337km timed special consisting mostly of rough sandy tracks with some added technical sections along the way. Totalling 813km – the longest of the event – the day will lead riders from Wadi Ad-Dawasir to Riyadh. 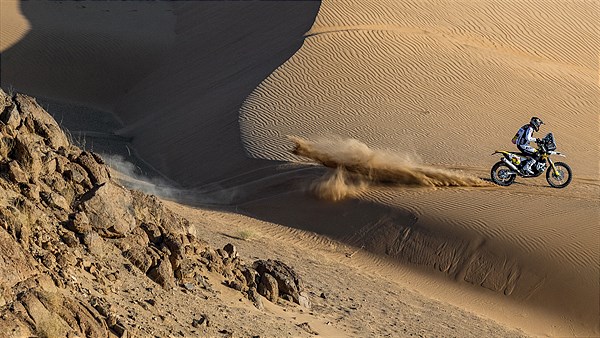 Luciano Benavides: “I’m happy to finish stage three. It was another long day, and one that for much of the stage I spent alone after passing the guy in front. I rode a good stage, not so fast but I didn’t make too many mistakes and stayed in the middle of the pack, which will give me a good start position for tomorrow. The day had a good mixture of terrain, from sand dunes to fast tracks and even some really rocky sections that were more like trial. My pace so far has been good, and the plan is to stay in touch and then push harder in the second week. Overall, I’m happy with how things are going.”

Pablo Quintanilla: “Today was a long day, just like yesterday. I set off well and by kilometre 40 I had caught the two guys ahead of me. Navigation was quite tough early on through the valleys and canyons and I think we lost some time there. After that I took the lead through the dunes before we rode together as a group in the big plateaus and faster tracks. Overall, I had a good day – we knew this would be one where we’d lose a little time, and we’d have to try and minimise our mistakes. I think I did a good job and I’m looking forward to tomorrow.”